The site of the wildlife garden seems to have had quite checkered history. For decades it seems to have been used as a tipping area and was full of rubbish. At some point in its history this stopped and eventually attitudes shifted enough for remediation projects to get off the ground. Occasionally individuals would attempt to work on it but it was such a big project that only the concerted effort of years was going to get the job done.

Chris Dovey was instrumental in setting up a group of volunteers to start work in 2014 with the understanding that it was a long term undertaking. Here’s a typical shot of what the land looked like back then. 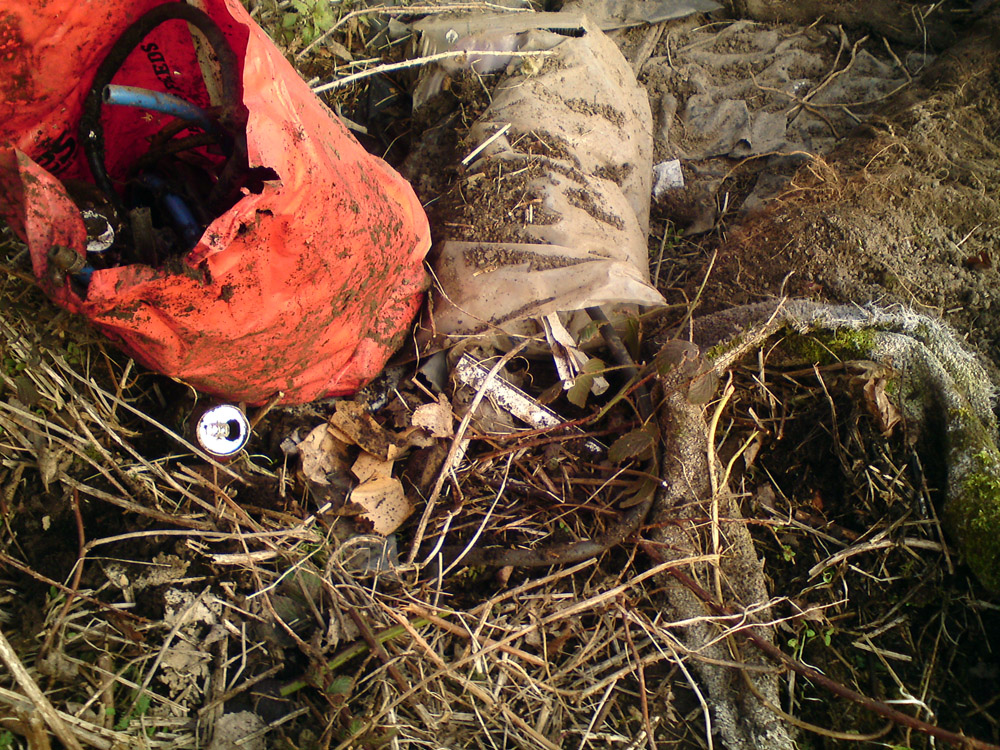 It took months of work to clear the surface of waste, especially the large amount of glass.  After clearance what remained was a very limited range of pioneer plants such as bramble, nettle, bindweed, dock and willow herb. In the distant past whether by accident or intent someone had introduced a variety of invasive forms of comfrey and over the years these built up a minimal surface of soil.

After the surface clearance and the removal of bramble the site was still a series of monocultures and quite daunting. 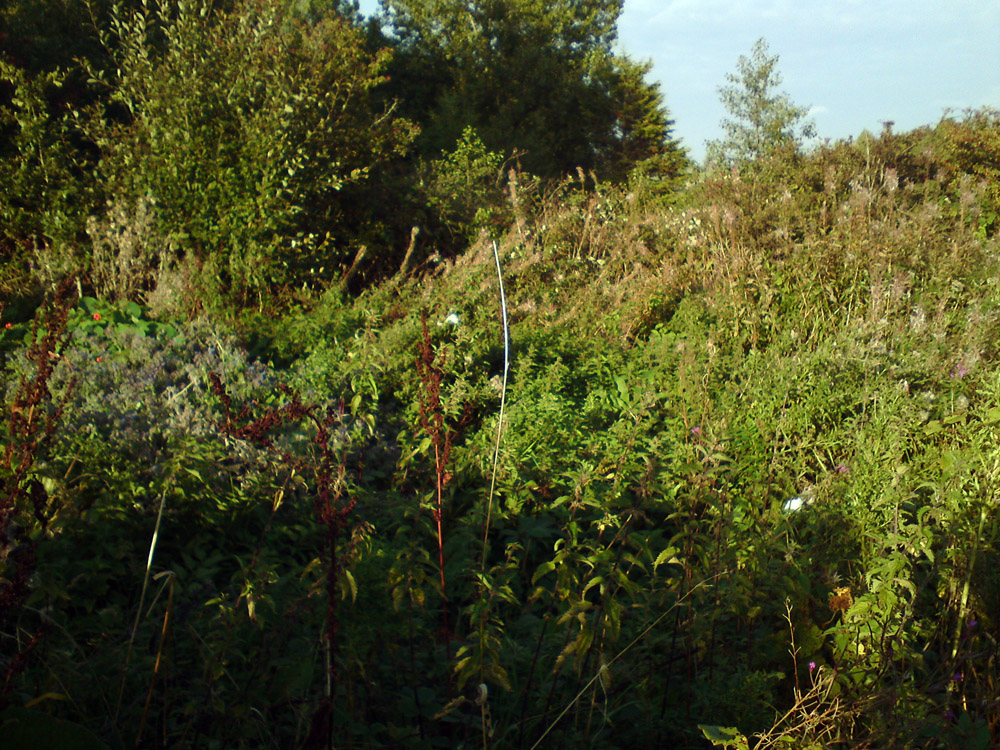 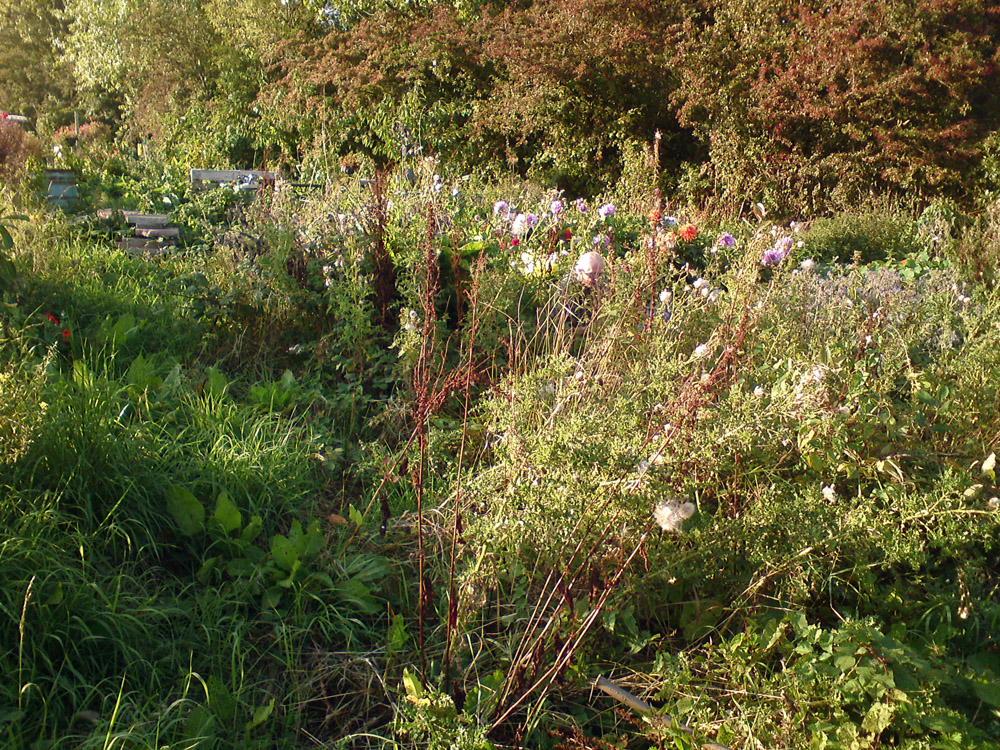 It was clear that we had our work cut out for us.

One of my fondest memories of Chris is working with him on clearing some of the land when on digging up a sheet of plastic buried about a foot deep we disturbed a family of voles.  The look of pleasure on Chris’ face when one of the baby voles sat on his spade gazing at him fearlessly,  was priceless.  He was overjoyed as he’d never seen a vole. His dream was to clear up the site and convert it into a vastly enriched area to encourage as much wildlife as possible. Sadly poor health took Chris very suddenly and just a few weeks after this photo, he was struck down by a massive heart attack. 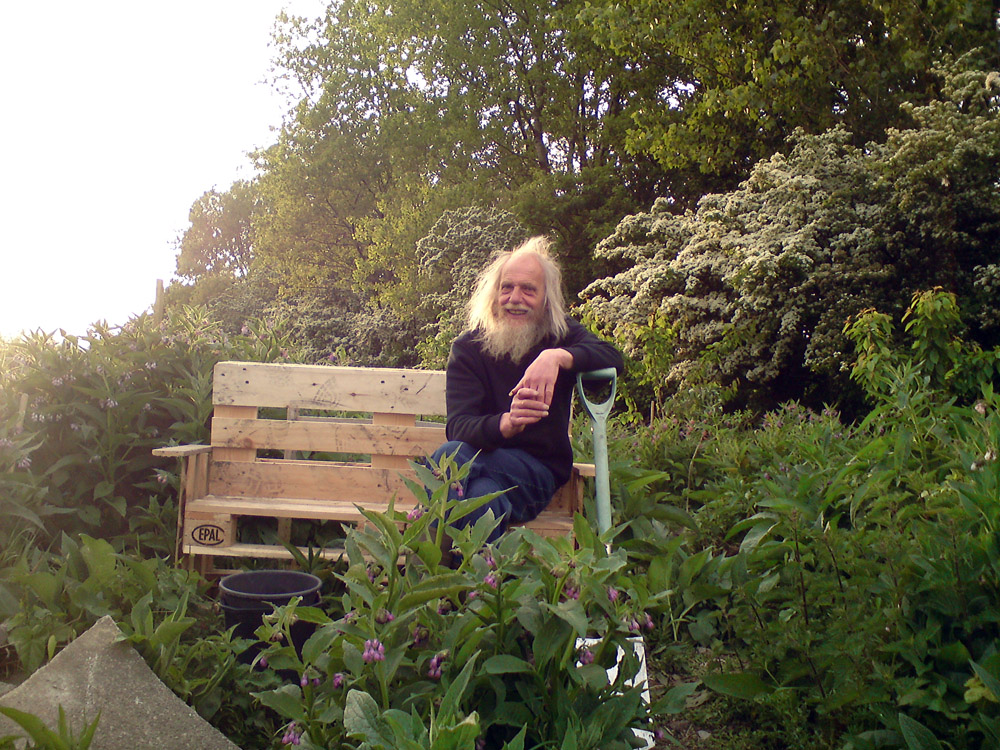 Losing Chris was quite a shock and it took a while for us to reevaluate the projects direction. It soon became clear that we needed a plan! It was obvious that this was going to take years so the first plan was to landscape the site as illustrated below and we’d work on enriching the environment as we went along. 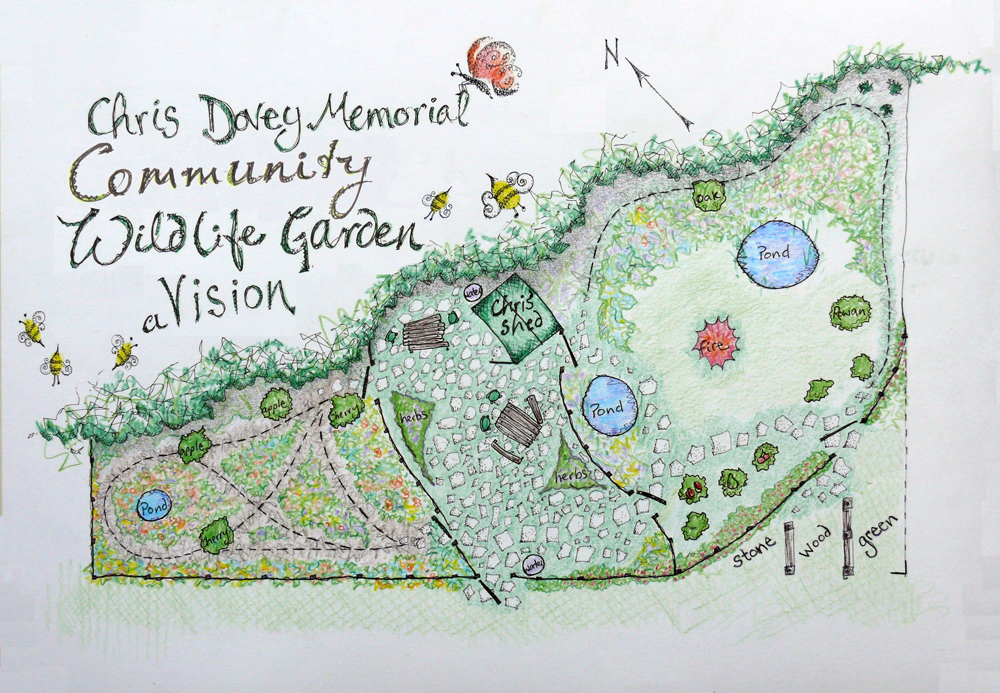 Once we knew where we were heading it was time to get some essentials in place,  like sand and gravel for leveling and paving. 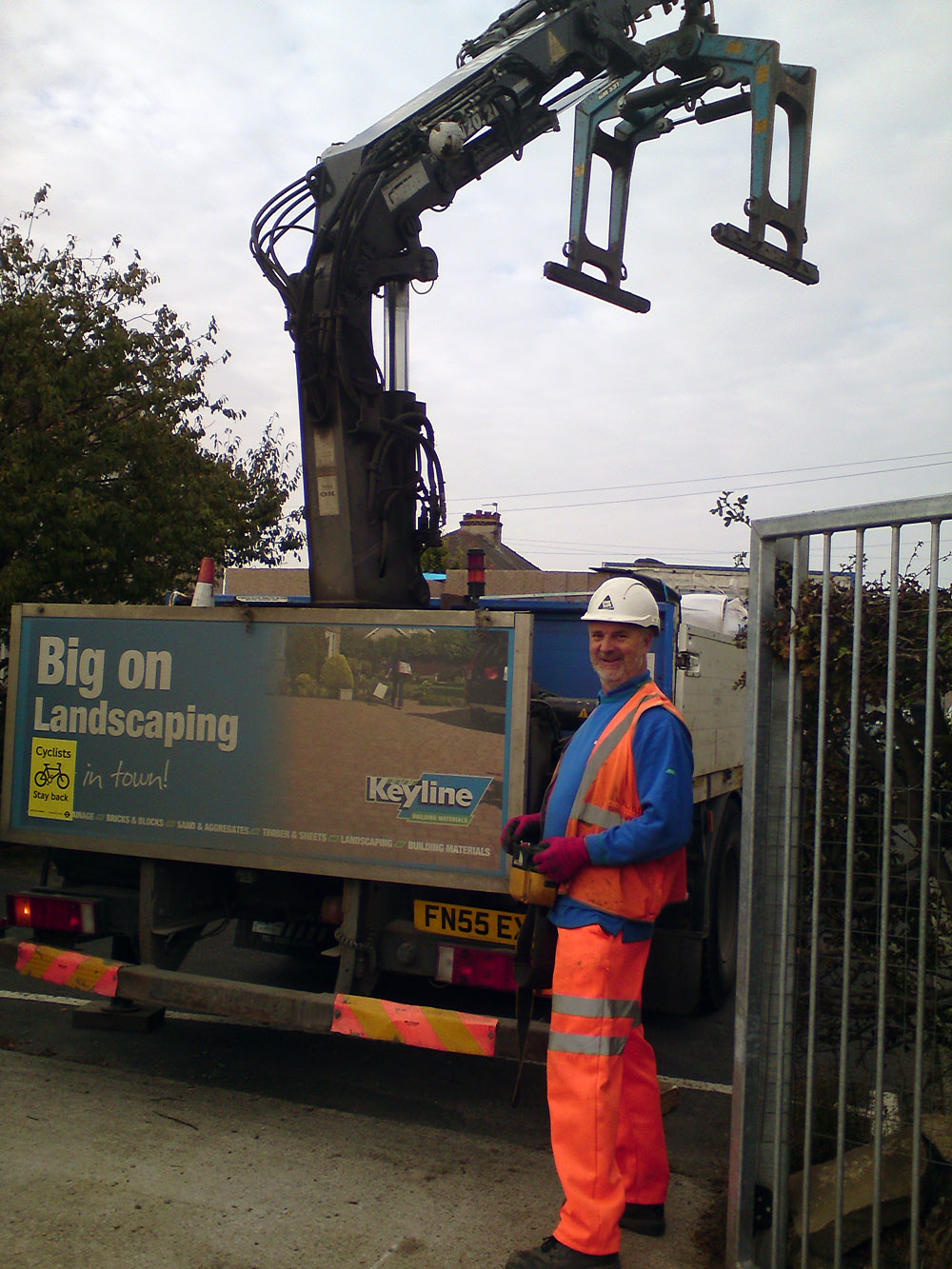 Fantastic service with a smile from Keyline, Lancaster. 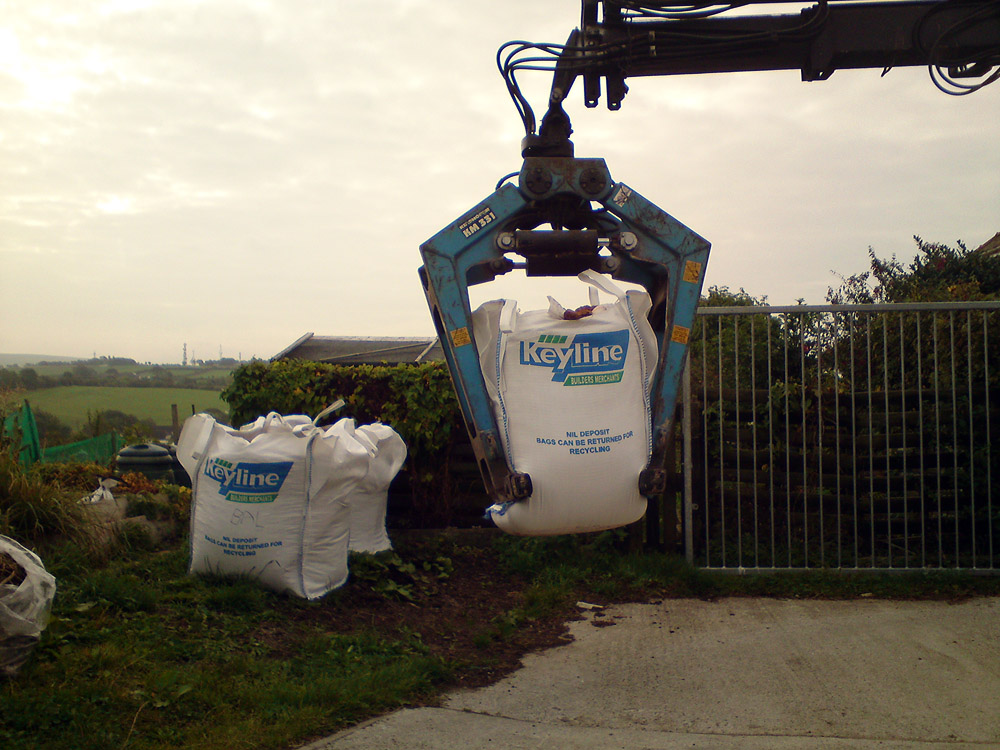 That meant the real work could begin and there was plenty of it to do. 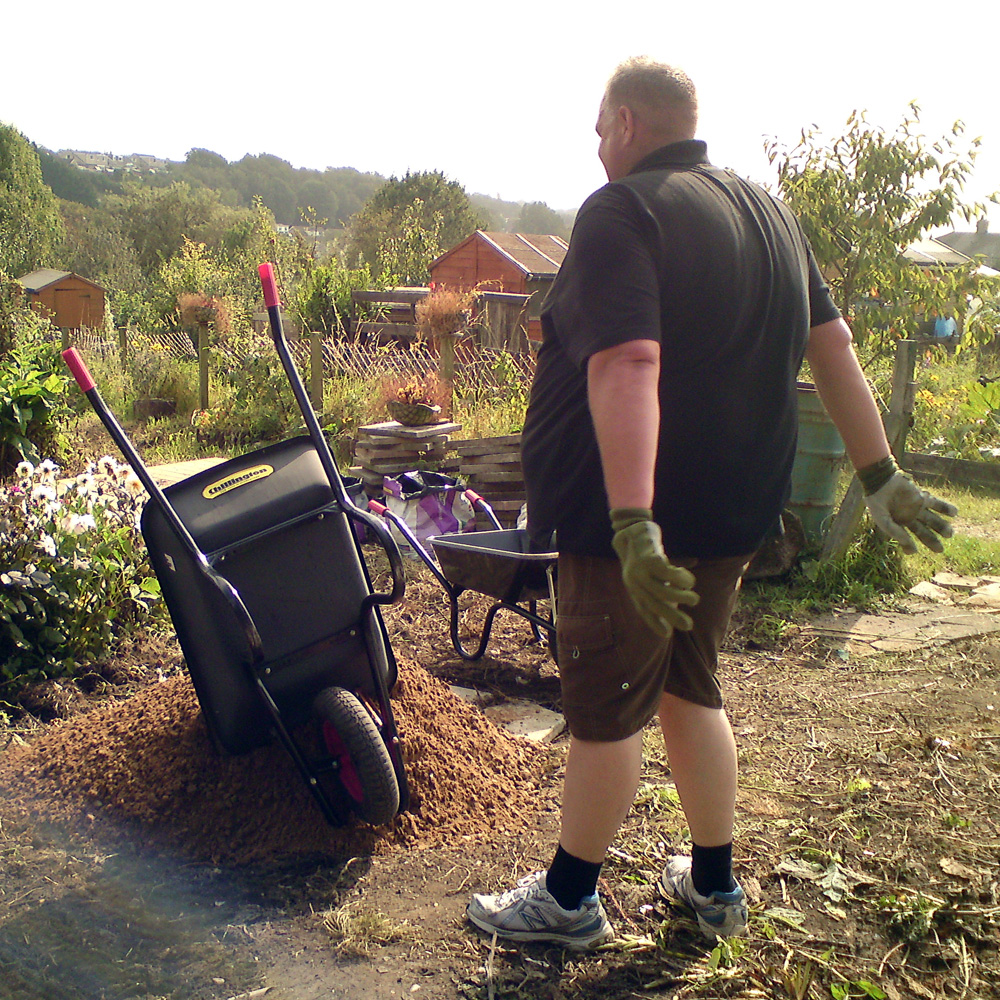 It took a lot of effort from a large group of volunteers to get all the materials we needed on to the site and to clear the space to use it. 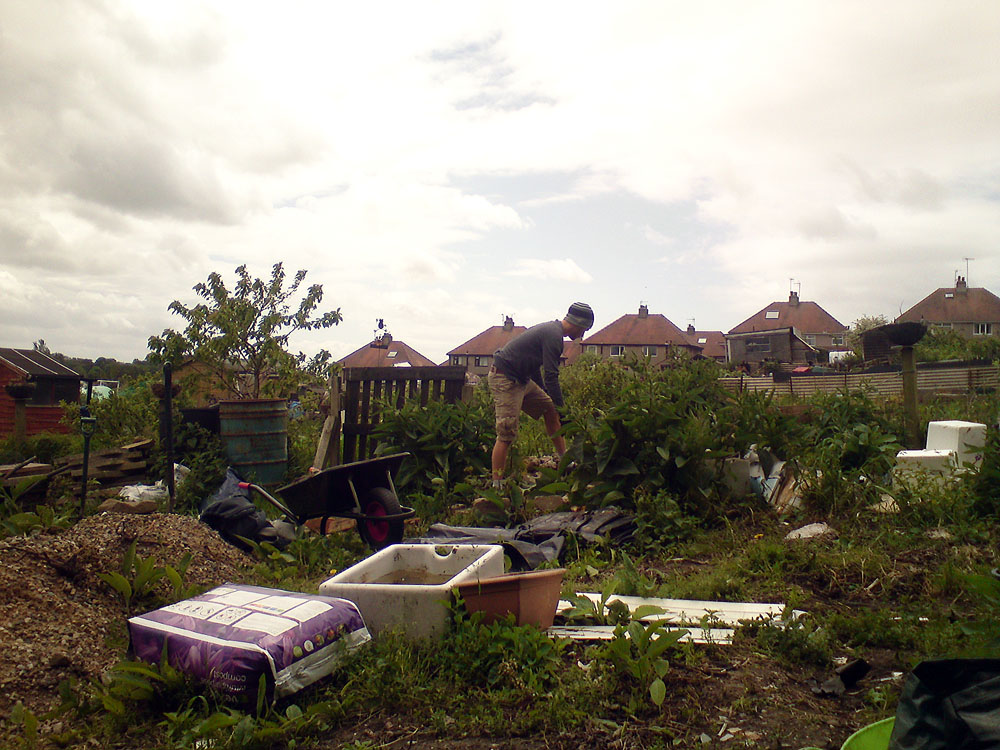 And then more materials 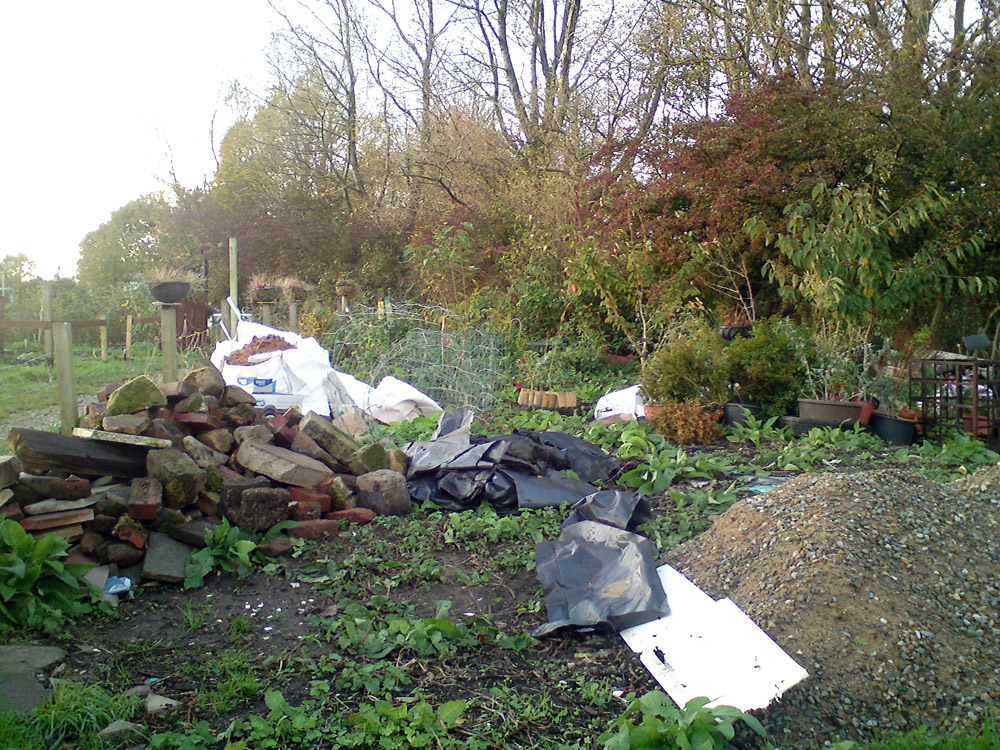 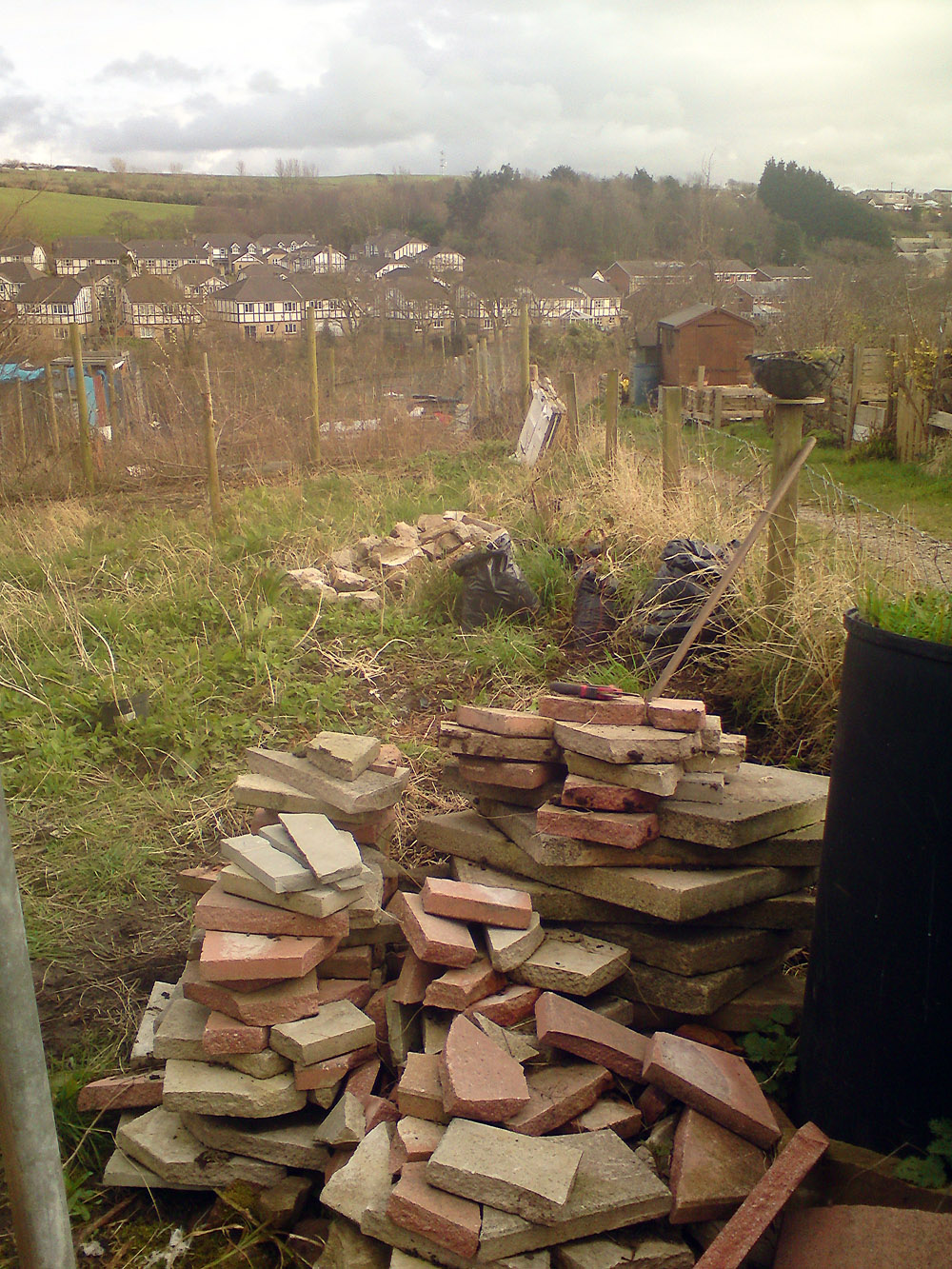 After a lot of hard work the central section of the garden was roughly levelled and Chris’ shed was put up on the new space. Now that we had a central space for storage, shelter and brew making, work could really progress. 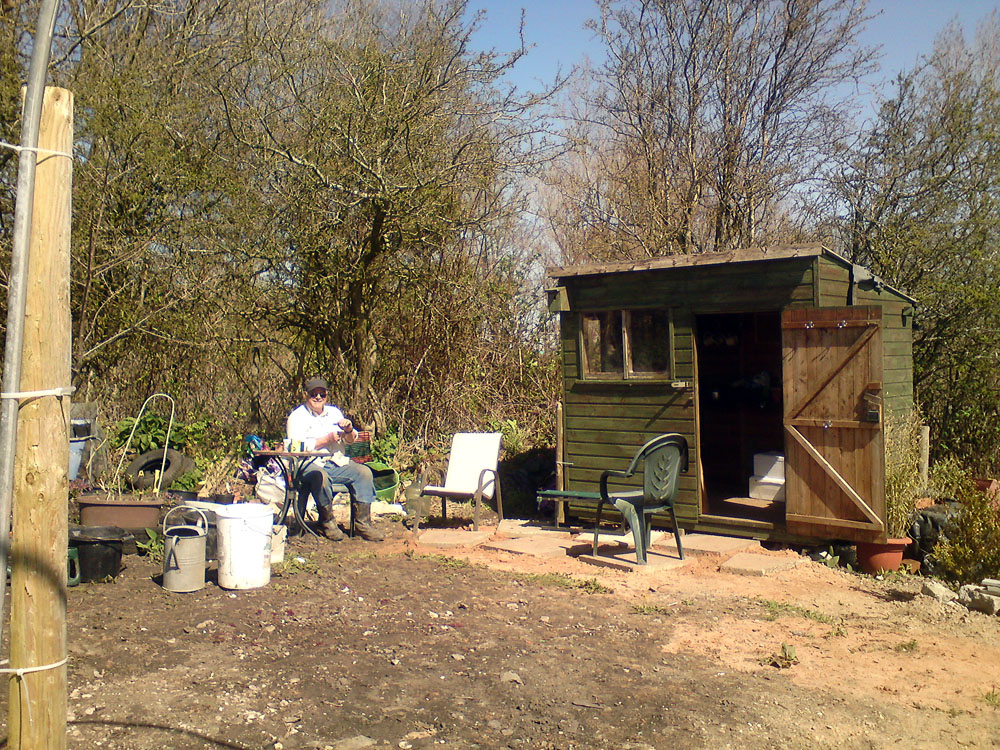 Beds were constructed and filled with good soil and intermediary plantings began. 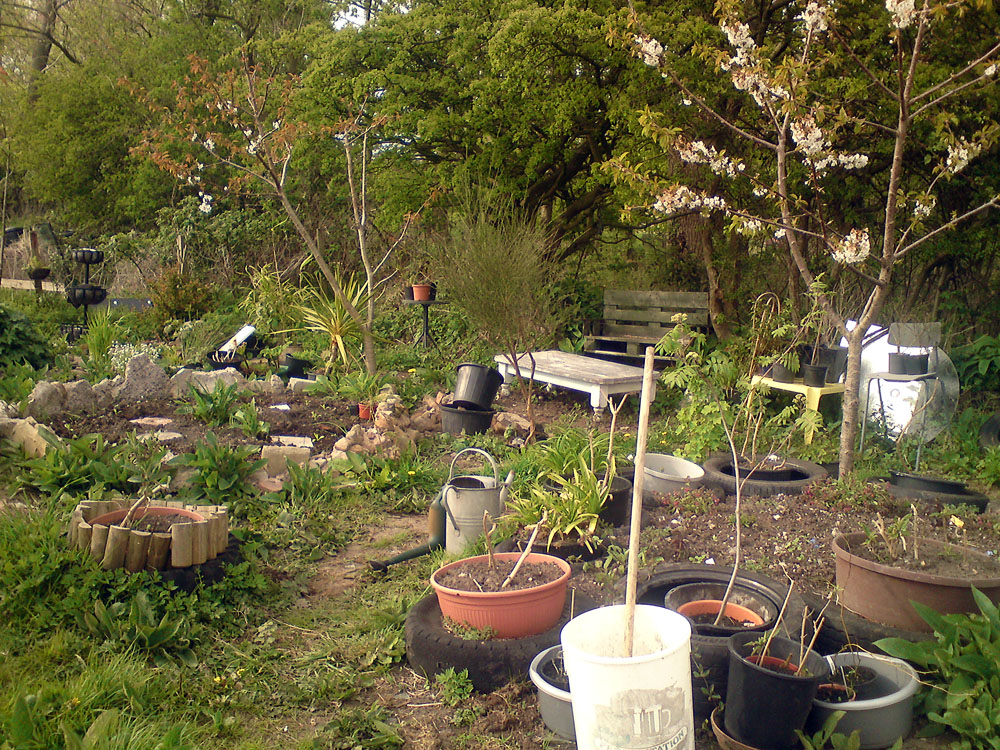 The first phase of paving was completed and we had functional space to manage the work from. 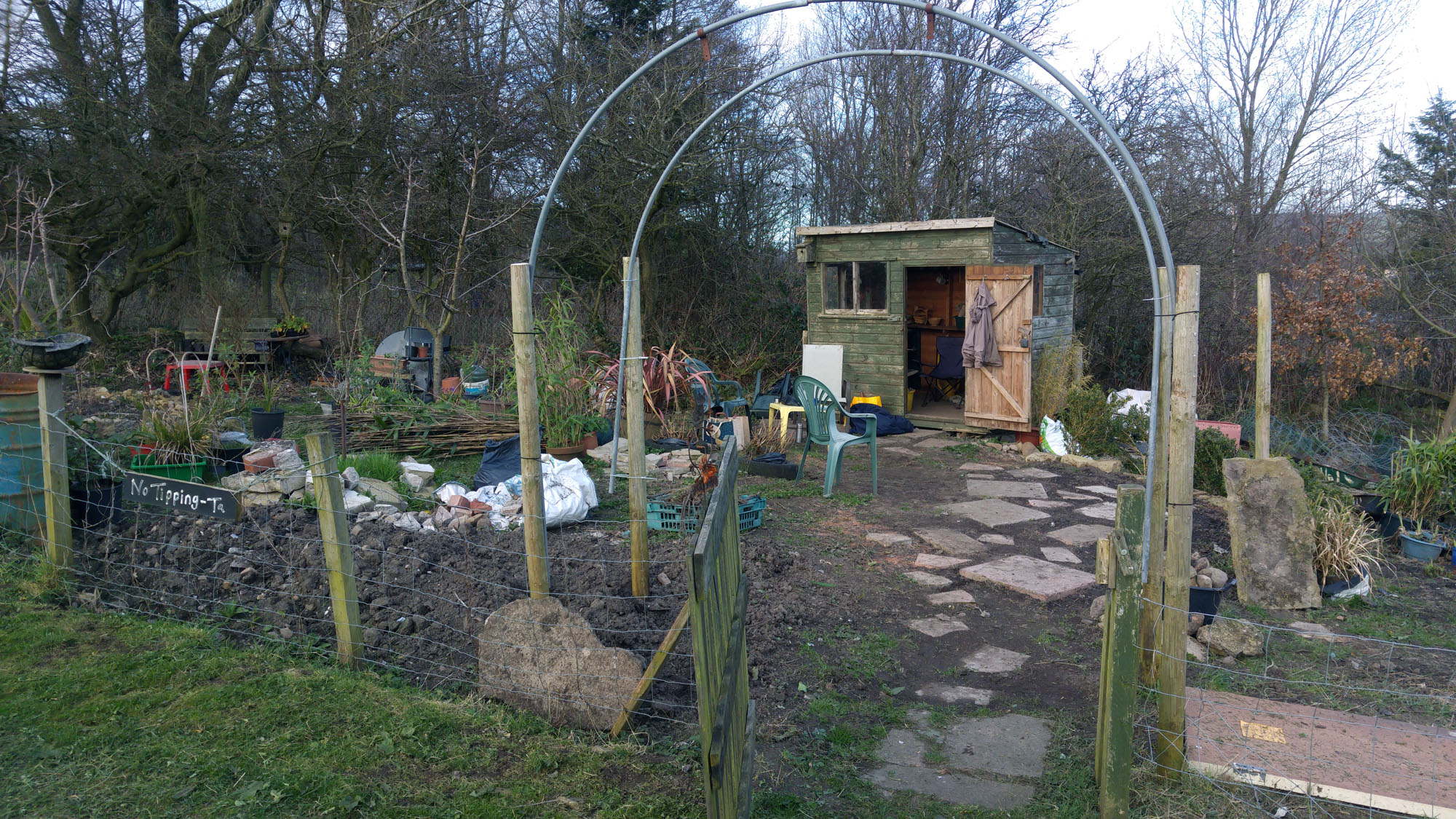 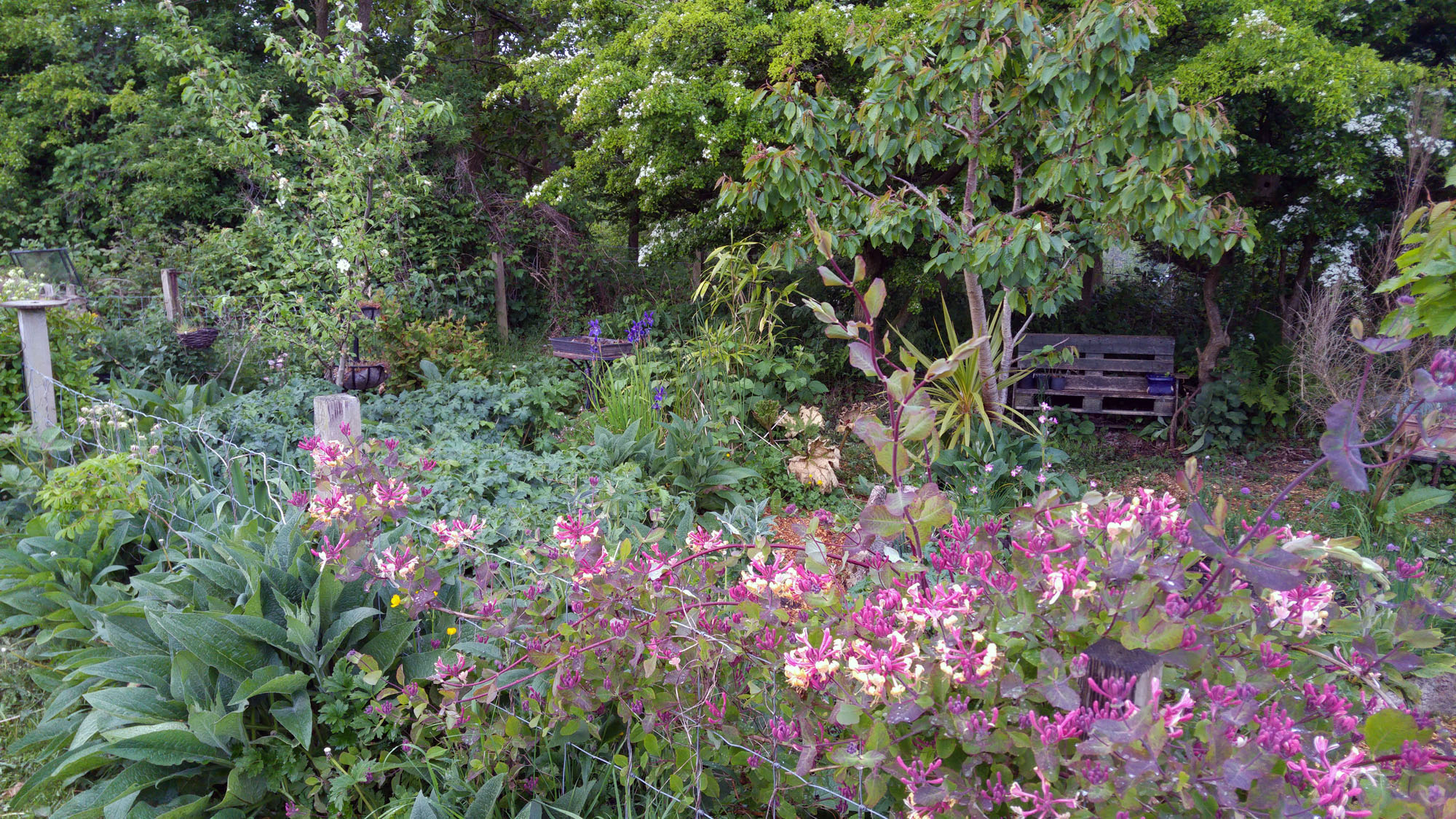 We ran into a lot of issues we hadn’t anticipated with the land itself and the plan had had to be modified to reflect that we simply cannot dig into this land.  Everything will have to be built up which is going to make creating a range of water features in the lower half of the garden an interesting challenge. As of August 2017 the team are working on developing a full sowing and planting plan for next year and an updated overall landscape plan.

Sign up for our newsletter if you’d like to be kept up to date with our progress. We promise not to swamp you with spam as we’ll only send emails out when we’ve something interesting to share.

This site uses Akismet to reduce spam. Learn how your comment data is processed.